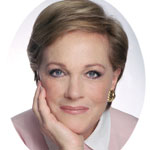 Julie is equally well-represented on television – her weekly variety series “The Julie Andrews Hour” won multiple EmmyÒ Awards during its run in the 1970’s. Other notable small-screen appearances include the televised version of Rodgers and Hammerstein’s Cinderella, several award-winning variety specials (including three with Carol Burnett), “Eloise at the Plaza” for Disney and ABC, and the CBS television network special live theatre presentation of “On Golden Pond” with Christopher Plummer.

Andrews’ dedication to children has been steadfast throughout her career. She began writing books for young readers over thirty-five years ago and her first two novels – MANDY and THE LAST OF THE REALLY GREAT WHANGDOODLES -remain in print and in high demand.  She has also co-authored over 20 picture books, novels and Early Readers with her daughter, Emma Walton Hamilton, including the #1 New York Times best-selling series, THE VERY FAIRY PRINCESS, JULIE ANDREWS’ COLLECTION OF POEMS, SONGS AND LULLABIES (the audio-book for which garnered the mother/daughter team a Grammy Award for Best Spoken Word Album for Children), the LITTLE BO and DUMPY THE DUMP TRUCK series, the medieval fable SIMEON’S GIFT, the middle grade novels THE GREAT AMERICAN MOUSICAL and DRAGON: Hound of Honor, and the #1 New York Times Best-seller THANKS TO YOU: Wisdom from Mother and Child.

Together the best-selling mother-daughter team head-up “The Julie Andrews Collection” publishing program, dedicated to publishing quality children’s books that “nurture the imagination and celebrate a sense of wonder.”  Their books embrace themes of integrity, creativity, nature and the arts.

Andrews and Hamilton developed stage and symphonic adaptation of SIMEON’S GIFT, which was developed at Bay Street Theatre and went on symphonic tour to venues including the Hollywood Bowl, Atlanta Symphony and the O2 Arena in the UK under the banner of Julie Andrews’ Gift of Music. They are currently collaborating with Goodspeed Musicals on a musical adaptation of THE GREAT AMERICAN MOUSICAL, their best-selling middle grade novel about a troupe of theater mice who live below the boards of a great Broadway theater.

Sorry, but we do not found any event to show here.